By The Publisher on Thursday, November 11, 2021
“Yessss,” Molly hisses.  She is out of her mind.  She peers down at a drooling Sabrina.  “Your mouth looks great.  I gotta use it.” She tears off her clothes, bearing her big black body.  “Eat me, you sexy little bitch.”

Sabrina’s drunk with lust as she ogles Molly’s big busty black body.  She opens her mouth and flicks out her tongue.  “Bring it to me, Molly.  I’ll eat your fish pie.”

“Yeah, April,” Sabrina moans, her eyes fixed on the red gash of Molly’s pussy.  “Get Leto.”

When April leaves, Molly lowers her black pussy to Sabrina’s face.  “Eat me, little bitch, and I’ll wash your face with my pussy juices.”

She flashes her tongue through the seeping pussy slit, coating her tongue with warm milky pussy-cream.

“Ahhhhhhhh,” Molly groans as Sabrina flicks her tongue through her pussy and over her clit.  “Mmmmmmm, so nice.” The big black woman wiggles her hips, the inside of her pussy pulsating, her clit swelling with blood.  “Mmmmmm, I like it.” She looked down and saw the top of Sabrina’s head.  “Tongue me, Sabrina.  Tongue-fuck big momma’s black cunt.”

Sabrina darts out her tongue.  It slithers into the steamy gash of her neighbor’s vagina.  Pussy muscles grip Sabrina’s tongue, trying to keep it a prisoner, but the rubbery invader is impossible to capture.  Sabrina teases the tip of her tongue against the spongy walls of Molly’s sizzling pussy.  The warm fuck cream oozes over her face and down her chin.

Sabrina plunges her tongue deep into Molly’s boiling pussy.  She skims her hands over Molly’s wiggling ass and hips, kneading her way to the mammoth globes of the black woman’s breasts.  Sabrina squeezes the fleshy meat of her breasts, her tongue darting in and out of Molly’s oozing vagina like a snake.

Hoss, Molly’s Great Dane, pads over from the other side of the living room, its tongue lolling out.  The dog steps between Sabrina’s slender legs and starts sniffing at her thighs.  The heated scent of her pussy flares its black nostrils.  The dog whimpers and drops to its belly and starts nipping at the sticky flesh of Sabrina’s inner thighs.

She starts to twitch, the Great Dane’s nipping teeth making her ass jerk.  She rolls her hips, her mouth sucking deeply on the delicious meat of Molly’s pussy.

Sabrina wants the same thing.  She thumps her ass on the floor, her pussy dripping and twitching for the Great Dane’s mouth.  She sucks, drawing Molly’s clit into her mouth as the woman moans with joy.

“Yeah,” Molly wails.  “Chew me up.  Finger my asshole.” She bucks against Sabrina’s mouth, her pussy pulsating, her big breasts flopping.  “Oooooo, get me off.”

Sabrina gobbles on Molly’s clit.  She sucks deeply, feeling the clit throb against her lips.  Sabrina starts to shake.  Hoss’s long rubbery tongue is now slapping at her pussy.  She twists her hips, eager for the dog to plunge its great tongue into her pussy.  Her hands sweep over Molly’s jerking hips to the creamy meat of her ass, her nails leaving a trail of red passion lines.

Sabrina plunges her fingers into the tight crack of Molly’s asshole.  Muscles clamp around the fingers like a vise.  Sabrina twists her fingers, her mouth active, still sucking and chewing frantically on Molly’s bloated clit.  She gouges at her neighbor’s asshole, her tongue lashing across Molly’s clit.

“Yesssss,” Molly moans.  “Ooooo, you’re getting me so fucking hot.” She jerks her head to the dog.  “Eat her up, Hoss.  Eat Sabrina’s tender little white pussy.”

Hoss jams its hard blunt snout against Sabrina’s pussy.  The dog’s thick rubbery tongue worms into the hot steamy loins as warm pussy-cream flows into its mouth and nostrils.  The dog snorts, jerks its head, its teeth banging against Sabrina’s swollen clit.  Sabrina goes insane.  With Molly’s pussy plastered against her mouth, she bucks her hips, jamming her crotch into Hoss’s face.  Sabrina gurgles Molly’s pussy juices flowing into her mouth and throat.  With her fingers twisting inside Molly’s asshole, she clamps her teeth into her neighbor’s clit and chews.

April comes in with Leto, the German shepherd.  They go into the living room.  Leto sniffs the air, its nostrils picking up the heady scent of sex that fills the room.  The dog whines, glancing up at its mistress, its tail wagging.

Sabrina hears her girlfriend.  Knowing she’s watching makes Sabrina even hotter.  Her ass thuds against the floor, her pussy grinding into Hoss’s snout.  The blonde gurgles.  Her teeth are gnawing away at Molly’s big clit.  The girl also claws at the walls of Molly’s shitter and feels the twitching muscles gurgling again as Hoss’s nipping teeth find her clit.

Holding Molly’s clit prisoner between her teeth, Sabrina lashes the tip of her tongue and gnaws hard.  Molly’s screaming grew louder and louder.  Her ass humps up and down.  The Great Dane nips at Sabrina’s clit.

The big black woman jerks her ass, the fingers in her asshole sending spasms through her tight shitter.  Sabrina’s mouth fills with the warm buttery juices of Molly’s climaxing cunt.  She gobbles on her neighbor’s clit and twists her fingers.  At the same time, Sabrina grinds her pussy into the blunt snout of Hoss’s face.  The teen sucks, stretching Molly’s clit almost to the point of tearing.  The frenzied suck sends Molly screeching into another howling orgasm.

“AHHHHHHHHHHHHHHHH,” Molly squeals.  She sways as her breasts flop, her head snapping from side to side.  “Mmmm, bite.  Bite it.” Molly twists her hips, her thick black hair slashing across her face.  “Bite my clit, bitch.”

Sabrina thinks she will either suffocate or drown.  She chews, then sucks hard, her fingers ripping at Molly’s shitter.  Gurgling noise escapes her throat, muffled in the meat of Molly’s pussy.  The girl thrashes her hips, needing to orgasm too, but Hoss, for the moment, is content to just lap lazily at her overheated pussy.

Molly’s arms eventually buckle, and she crashes to the floor, Sabrina’s fingers popping from her ass.  She squirms away, writhing on her stomach, her breasts squashed beneath her.  “Ooooo, April,” Molly groans as she rolls to her back.  “You were right.  Your girlfriend is fantastic.  Absolutely fantastic.”

“I know,” April moans as she plays with Leto’s canine cock.  “She eats pussy like a demon.”

“Damn, big momma is one happy slut right now,” Molly said, still panting as she recovered from her massive orgasms.  “So, what’s next?”

“I think Sabrina has some unfinished business,” April said and giggled.

“Chew her, Hoss,” Molly orders as she crawls over to her pet Great Dane.  “Chew her pussy.”

The blonde girl’s breasts shake, her back arching.  Her legs stiffened, every muscle in her slim body growing taut as her pussy contracts, ready to burst.  Hoss gobbles on her pussy as Molly and April watch.  The dog lashes its tongue over Sabrina’s sensitive clit, then chews, her humping body agitating the dog.  The animal squirms on its belly, pussy juice flowing into its mouth and nose as it brings Sabrina to the peak.

Urged on by its mistress’s voice and her whacking hand, Hoss sinks its teeth into Sabrina’s pulsating clit.  The dog growls.  Its neck twists and its teeth nearly crush her blood-engorged clit.  Sabrina goes into convulsions.  The inside of her cunt explodes, and orgasm is ripping through her like a bolt of lightning.

Hoss snarls as the teenager goes insane.  The dog chews, its sharp teeth nipping at her clit, turning it into a raw piece of flesh.  Pussy cream gushes over the Great Dane’s snout and into its nose, flows into its mouth, and over its rubbery tongue and lips.  The dog jerks its head up, taking Sabrina’s clit with it as she lifts her twisting ass off the floor.

Snarling and biting, Hoss mangles Sabrina’s clit.  The dog shakes its head violently, stretching and twisting her clit as she thrashes on her back.  Pussy juice gushes over the dog’s snout, her pussy banging into its face.  The dog growls again, jamming its hard head into her pussy.  Sabrina bucks on her back.  Her ass thumps against the floor.  Her pussy repeatedly explodes as Hoss chews her clit.

Sabrina thrashes on her back.  Legs spread, she twists her hips, her pussy contracting as one orgasm after the other whips through her cunt.  She lunges up, rotating her hips, and screams as Leto’s spurting cock coats her face.  Jerking German shepherd’s cock rapidly, April tries aiming its spraying wads at Sabrina’s gaping mouth.  A stream shoots from its pisser.  It hits Sabrina’s tongue and splashes into her throat and over her lips.

“April.  April,” Sabrina squeals and starts to shake uncontrollably, her legs slapping at the rug, her ass thumping up and down.

“Easy,” Molly said as Hoss sat up.  “Easy.” She strokes its coat and brings her mouth to its, licking its jowls clean of Sabrina’s pussy juice.  “Mmmmmm.  That girl is so delicious.”

Leto finishes and drops next to April, the dog’s head on her lap.  “What do you wanna do now, babe?” the redhead asks.  “We got two dogs to take care of your every need.”

A weak smile spreads over Sabrina’s face.  “I’m too tired to do anything right now,” she moans.  “I can’t even sit up.”

Molly peers at her sexy redheaded neighbor.  “Why don’t we have fun with Hoss while Sabrina rests?”

“Sounds good to me,” April said, staring at Hoss’s cock jutting out from its sheath.  “I’m ready for anything.”

Sabrina moans, rolls onto her side, and curls up next to Leto as her girlfriend and neighbor attack the giant Great Dane.

This is a free sample of Moe Lester’s ‘Big Momma’s House.’ Buy the eBook or join our Members Area to read all out stories. 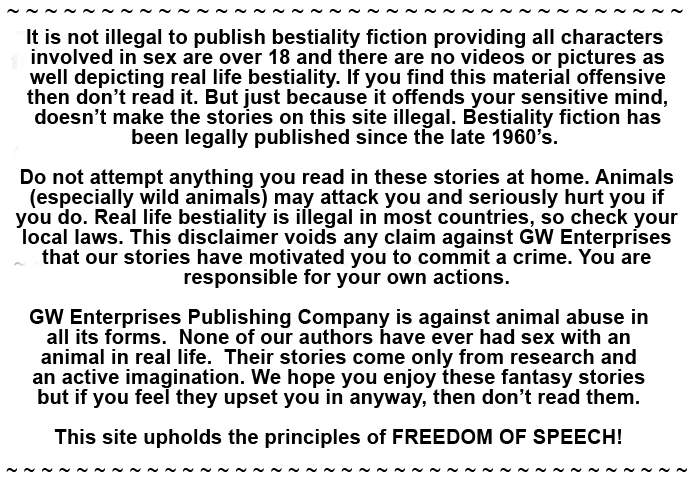 Close Encounter of the Worst Kind!